Student sues WCSD after being punished for wearing pro-gun shirt 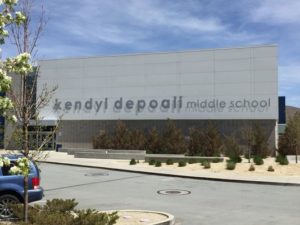 An eighth-grade student is suing the Washoe County School District after he was told to cover his pro-gun T-shirt because it was in violation of the district’s dress code.

The federal lawsuit, filed Tuesday morning in U.S. District Court in Reno, alleges that the school district’s dress code, which prohibits depictions of “anything that promotes weapons,” is a violation of the student’s First Amendment rights.

“This lawsuit challenges, at its core, the school district’s policy which we believe is unconstitutionally overbroad and violates the First Amendment on its face,” said Brandon Combs, president of the Firearms Policy Coalition.

The student, who attends Depoali Middle School, is identifiied in the lawsuit only by his initials, “G.M.,” but a press release from the Firearms Policy Coalition identifies his mother as local police dispatcher Audrey Guardanapo and his father as former law enforcement officer and U.S. Marine veteran Shaun Guardanapo.

The students was disciplined twice for wearing pro-gun clothing, according to the lawsuit.

He was first disciplined on Nov. 20, 2017, for wearing a shirt from a local gun store, Sparks Black Rifle. That shirt depicted the store’s logo, which according to the suit uses the silhouettes of a rifle and handgun.

He was again disciplined on March 12 for wearing a shirt promoting the Firearms Policy Coalition. That shirt features the words “Don’t Tread On Me” and a coiled snake. It also includes references to the Second Amendment and other “constitutional themes.”

The second shirt did not depict an image of a firearm.

“The shirt did not promote or advocate illegal activity; it contained no violent or offensive imagery; nothing on it was obscene, vulgar or profane … And yet (the student) was prevented from wearing his shirt based on school officials’ disagreement with the message they believe it conveyed,” the lawsuit states.

Just days before filing the lawsuit, the coalition launched a website and accompanying guide aimed at helping students who identify as pro-gun use speech and their First Amendment rights to counteract this year’s nationally organized student walkouts calling for stricter gun control legislation.

He was then threatened with further discipline if he wore the clothing again.

“At the end of the day, that’s all it takes to constitute a First Amendment violation,” Combs said.

The school district said it was served the lawsuit on Tuesday morning and is “looking into the allegations at this time,” but could not comment further.

This is a developing story and will be updated as more information is made available.